Whether you call them ranches (US) or stations (Australia), the sheer size of some cattle grazing grounds defies belief, often stretching over thousands of acres, with King Ranch in Texas (825,000 acres), and Alexandria station in Australia (4 million acres), among some of the biggest and most well-known examples.

Keeping track of livestock across such vast and varied landscapes in all weather conditions is a clear challenge, whether on horseback, from the front seat of a four-wheel drive or even from an aircraft cockpit. However, go higher still – all the way into space, in fact – and suddenly a very different picture starts to emerge.

A new generation of intelligent monitoring devices that utilise satellite tracking, as opposed to dedicated and expensive telecoms infrastructure on the ground, offers ranchers a hassle-free method to locate their cattle, boost efficiency and improve animal welfare.

The GSatSolar Rancher, which officially launches next month, is one of the first satellite-enabled solutions to hit the market. The small, solar-powered tracking device takes the form of an ear tag and is designed to keep tabs on any animal for its entire life – all at a low, one-time cost. Once mounted, the device collects and sends location data four times a day via satellite. Ranchers can then access a dedicated web-based platform, GSatTrack, to view and manage the data.

“Prior to GSatSolar, there was no cost-effective, specifically engineered satellite-based livestock tracker, and it was designed to fill that gap in the market,” explains Justin Vizaro, product manager, Global Satellite Engineering (GSE), which manufactures the device.

The ear tag itself features a proprietary plastic blend that performs well in outdoor environments, and which is also medical grade to ensure animal welfare. The tag has been designed to be deployed on each animal for a period of three years, without the need for maintenance or support of any kind. “We have seen no evidence in testing to suggest the product won’t meet these performance expectations,” says Vizaro.

GSE continues to put the product through its paces on ranches of various sizes across North America: “Our product testers are almost entirely tracking cattle on free range grazing areas that are 100% off grid and outside of cellular coverage. The primary testing goal [because of the short time window] was to track enough animals to be able to see movement patterns, establish benchmarks for normal daily activity, and identify ‘hotspots’ where animals go frequently or ‘cold zones’ they typically avoid in the grazing areas. After two weeks of testing, most were able to see these macro insights, which only become clearer over time and with more animals tracked.”

Beyond feed scheduling insights, the data captured can be used to ensure farm-to-fork traceability and loss prevention, while GSE continues to work on further applications.

“This product is creating an entirely new category for connected assets in the ag field,” adds Vizaro. “As such, we expect natural evolution as customers tell us how they’re ‘hacking’ a solution for other aspects of their ranches or farms using our products, and whenever possible, we will use that feedback to improve future offerings.”

Other mounts are also available, allowing the device to operate as a standard low-intelligence IoT device for vehicles and equipment.

“Quite frankly, we find that many of the people we talk to are just excited about the prospect of knowing where their assets are in the first place,” reports Vizaro. “Beyond that, it’s mostly functional aspects of GSatTrack that drive value. Being able to run reports, set alerts about certain activity, group assets, draw geofences, and view asset movement history on a map are all tools that were never available or accessible in this market,” he continues.

“We have spoken to a few customers who mentioned using GSatTrack reports and shared views to assist with various types of industry association audits, to the point of even starting conversations about API integrations to automate those audit processes,” notes Vizaro.

“The system can help a vet find and care for an animal or send a specific alert based on the behaviour of an animal,” adds Jeff Palmer, GSE’s CEO, who grew up on a large cattle farm in Montana, USA, when asked about the most common, current use cases. “It can tell the vet or farmer a specific time of day that an animal comes to a watering hole or feed lot. The consumer or retailer can utilise location data to learn about where the meat they’re eating was raised, and what sort of life it had – how many thousands of miles it walked during its lifetime as opposed to being reared in a pen. Imagine finding a simple QR code on the food packaging or menu that tells you about the life and history of that animal.”

“Traceability from farm to fork has not previously included the life of the cow, so it is now much easier and more verifiable to certify subsets of beef products as ‘organic’ or ‘grass-fed’,” adds Vizaro. 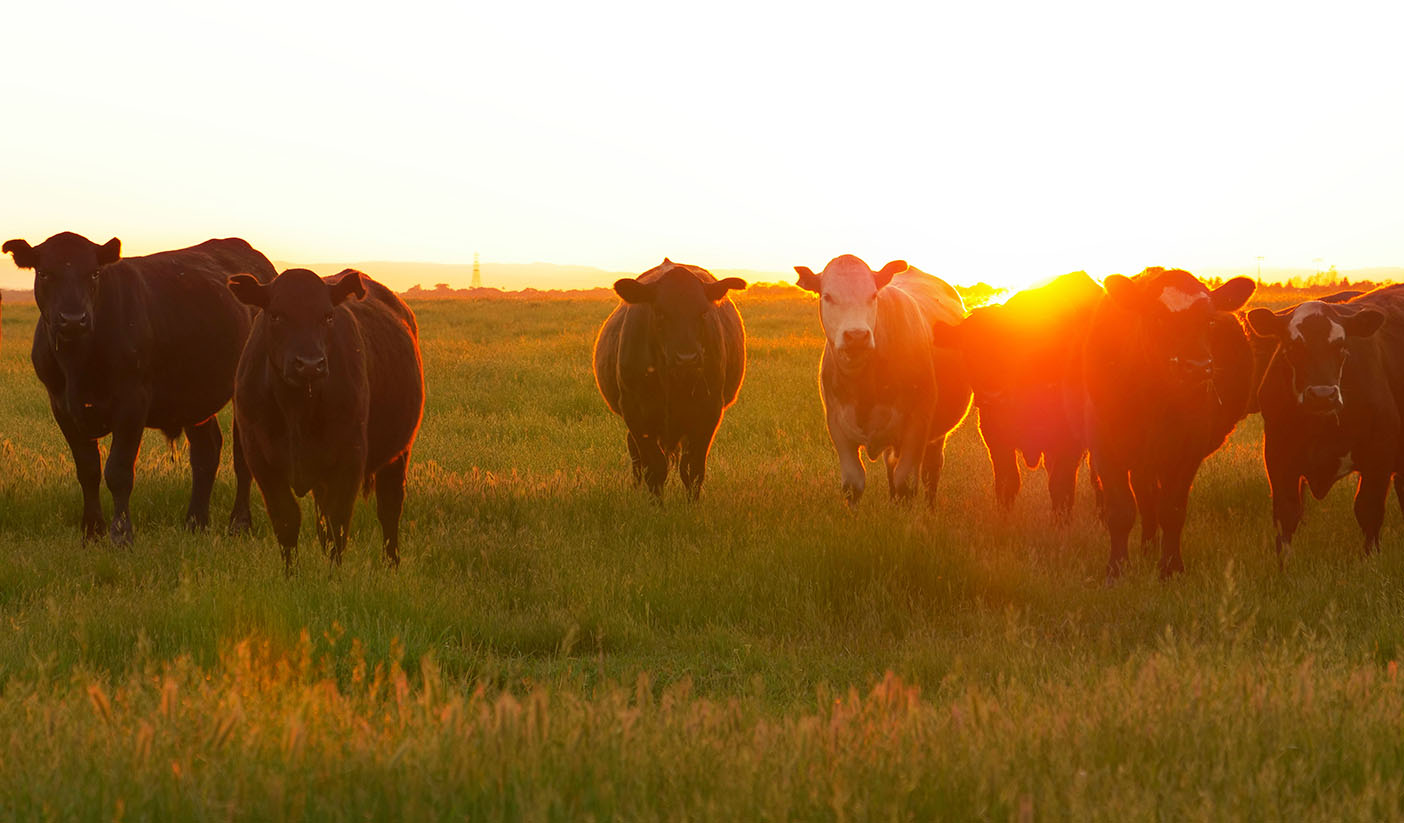 Such distinctions help command premium pricing, and the level of detail available with GSatSolar could even establish a new verification standard for food labelling.

However, Palmer believes the data captured by the GSat Solar Rancher really comes into its own when used to build a better picture of the supply chain. As such, the technology has the ability to disrupt industry practices that can lead to over-supply and shortages.

“The demand starts at the store or the restaurant, which feeds up to the processor to tell them how many cattle they need each month to keep up,” he says. “When that’s all on paper and done via phone calls and manual orders, you’re always going to be behind the algorithm. You’re having to over process to meet consumer demand and ensure you don’t run out. The data we provide ensures farmers and processors can monitor, manage and maximise their operations to meet demand more efficiently.”

In particular, Palmer foresees a future application that includes information on the age of tracked assets to enable processors and farmers to identify which animals are best placed to meet surges in demand. “A downstream processor could go to a cattle inventory site and find out which farms have cattle ready for finishing,” he says. “At this stage, our goal is to learn about the industry. There’s a lot of very interesting feedback coming back from farmers and processors and it’s clear there are some real opportunities. I’m quite shocked at how much demand there is for something like this.”

In effect, adding such traceability to free-range livestock production could usher in a truly transparent supply chain, where producers and buyers can track available supply in near-real time, allowing rolling, just-in-time production management.

US customers could also use location data to secure government subsidies from the Bureau of Land Management: “The bureau provides carbon offset paybacks to farmers based on where they graze their cattle,” notes Palmer. “The tracker can prove that your cattle are aerating ground in certain areas.”

Going forward, Vizaro says he expects the majority of product growth to be on the software side, enabling the company to create, test, and deploy new intelligence features, reports, and visualizations much more quickly and effectively. “That’s just another reason to go with GSatSolar – the ability we have to improve the entire product experience without waiting on vendors and service providers gives us the power to respond directly and immediately to customers’ needs.”

In terms of total cost, Vizaro notes the standard US$130 per unit price includes three years of satellite airtime, plus the software license. “Prices scale for larger herds,” he says, with GSE having already secured orders from farmers with over 10,000 heads of cattle.

He expects they will see a healthy return on their investment: “The economics of data intelligence ROI include a number of measuring criteria, but we have chosen to focus quantifiable benefits on cost savings related to time and fuel during round up, loss prevention and recovery, and premium pricing on the sale of animals that can get designations such as ‘grass fed’, ‘free range’, ‘organic’, etc – because of the increased traceability.”

For now GSE appears to have cornered the market: “Alternatives to the GSatSolar for solar-powered satellite animal trackers are all still in development and have not launched yet,” suggests Vizaro. “We expect to be the most competitively priced option due to our relationship with the airtime provider and because of our software platform being an in-house product as well.”

With over 20 years experience in editorial management and content creation for a broad spectrum of market-leading B2B magazines and websites in the transport and technology sectors, Anthony has written news and features covering everything from airport security to autonomous vehicles, and stadium design to sustainable energy.

At COP26 this month, 105 countries including the US, Canada and Brazil promised to reduce…

We use cookies on our website to give you the most relevant experience by remembering your preferences and repeat visits. By clicking “Accept All”, you consent to the use of ALL the cookies. However, you may visit "Cookie Settings" to provide a controlled consent.
Cookie SettingsAccept All
Manage consent

This website uses cookies to improve your experience while you navigate through the website. Out of these, the cookies that are categorized as necessary are stored on your browser as they are essential for the working of basic functionalities of the website. We also use third-party cookies that help us analyze and understand how you use this website. These cookies will be stored in your browser only with your consent. You also have the option to opt-out of these cookies. But opting out of some of these cookies may affect your browsing experience.
Necessary Always Enabled
Necessary cookies are absolutely essential for the website to function properly. These cookies ensure basic functionalities and security features of the website, anonymously.
Advertisement
Advertisement cookies are used to provide visitors with relevant ads and marketing campaigns. These cookies track visitors across websites and collect information to provide customized ads.
Analytics
Analytical cookies are used to understand how visitors interact with the website. These cookies help provide information on metrics the number of visitors, bounce rate, traffic source, etc.
Others
Other uncategorized cookies are those that are being analyzed and have not been classified into a category as yet.
Functional
Functional cookies help to perform certain functionalities like sharing the content of the website on social media platforms, collect feedbacks, and other third-party features.
Performance
Performance cookies are used to understand and analyze the key performance indexes of the website which helps in delivering a better user experience for the visitors.
SAVE & ACCEPT
Powered by