Broad application of herbicides in agriculture might help increase food production but it causes damage to the environment and arguably human health. Sustainable alternative solutions are at the top of the R&D list for several technology companies around the world. One of them is US based company Carbon Robotics which today announced it has secured US$27 million in Series B financing.

With an approach similar to the UK’s own Small Robot Company, Carbon Robotics has developed a chemical-free method of eradicating weeds, one by one and without disturbing the soil. Their Autonomous Weeder, revealed for the first time in April, utilises high-powered lasers and twelve high-resolution cameras to eliminate up to 100,000 weeds per hour through thermal energy. They call it ‘Laserweeding’ and it works day or night, in all weather conditions.

Small Robot Company has armed its own weed killing robot ‘Dick’ with RootWave technology which uses electricity to individually kill weeds in line with the robotics firm’s ‘Per plant’ farming strategy. Last week the company closed its crowdfunding campaign 3 days early, overfunding by 200% and raising £4m from over 2600 retail investors. Small Robot Company has now secured £11 million in funding to date, including £9.4 million from its previous Crowdcube rounds, and £1.56 million in UK government grants.

With 263 herbicide-resistant species across 71 countries, Carbon Robotics has seen a high demand for its weed destroying robots, securing a number of growers and bookings that exceed US$20 million. Farms that have ordered laser-weeding units include Grimmway Farms, Carzalia Valley Produce, Mercer Ranches, Taylor Farms, Triangle Farms, Terranova Ranch, Bowles Farming Co, Braga Ranch, Duncan Family Farms and Amigo Farms. The company has already sold out of its 2021 and 2022 models and begun accepting orders for 2023.

Small Robot Company launched its first commercial robot in April. Its ‘Tom’ weed monitoring robot is now delivered to commercial specification and has entered service on UK farms. Customers include the Lockerley Estate, where robots are a key part of its regenerative farming strategy, as well as British supermarket chain Waitrose & Partners and the UK’s National Trust. It surely won’t be long before ‘Dick’ is commercially rolled out to zap weeds.

“The already demanding task of weeding has only gotten harder for farmers to manage as more herbicide-resistant weeds develop and the cost of herbicides increases,” says Cameron Borumand, general partner at FUSE, “Carbon Robotics has built a game-changing solution to solve one of the biggest problems in agriculture. Farmers have been innovative and resourceful in addressing this problem so far, but they deserve the best technology to help them execute one of the most important jobs in the world—putting food on people’s tables.”

The funding will accelerate Carbon Robotics’ growth, including scaling the production of the Autonomous Weeder. It will also be used to grow its engineering team, establish regional sales and support for customers across the U.S. and invest in the innovation of new products and technology.

“This investment further validates our mission to create tools that utilise technology to address farmers’ toughest problems,” says Paul Mikesell, CEO and founder of Carbon Robotics. “Weeding is one of the biggest challenges farmers face, especially with the rise of herbicide-resistant weeds and increasing interest in organic and regenerative methods. This round of investment will enable us to scale our operations to meet the increasing demand for this technology. Additionally, this funding will allow our team to continue to innovate new products and identify revolutionary ways to apply technology to agriculture.”

Erik Benson, managing director of Voyager Capital commented that “Carbon Robotics is fundamentally changing how farmers weed fields and has the potential to be this millennium’s Deere & Company.” We think there’s no doubt that one of these two robotics firms is headed for herbicide reducing greatness but which will it be? 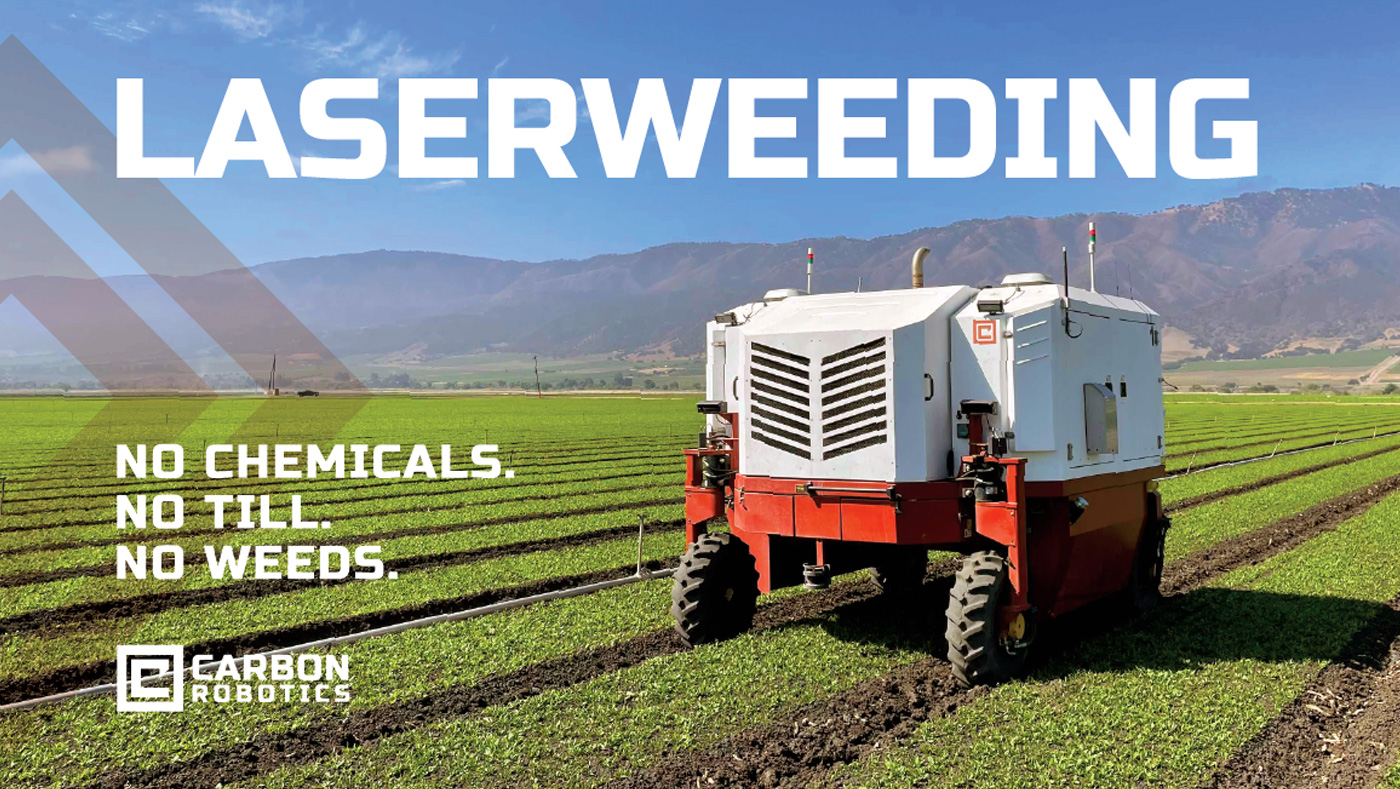 Matt is a digital media consultant with over 20 years' experience working with publishing and events companies in the science, technology, food and agricultural sectors. With a passion for growing his own fruit and veg (on two allotments) Matt also exhibits 300kg pumpkins and is an RHS Chelsea volunteer. With a sizeable horticultural social media presence Matt has been a finalist in the Garden Media Guild's blog of the year and social media awards. He built farmingtechnologytoday.com to highlight larger scale sustainable innovations in food production.

At COP26 this month, 105 countries including the US, Canada and Brazil promised to reduce…

We use cookies on our website to give you the most relevant experience by remembering your preferences and repeat visits. By clicking “Accept All”, you consent to the use of ALL the cookies. However, you may visit "Cookie Settings" to provide a controlled consent.
Cookie SettingsAccept All
Manage consent

This website uses cookies to improve your experience while you navigate through the website. Out of these, the cookies that are categorized as necessary are stored on your browser as they are essential for the working of basic functionalities of the website. We also use third-party cookies that help us analyze and understand how you use this website. These cookies will be stored in your browser only with your consent. You also have the option to opt-out of these cookies. But opting out of some of these cookies may affect your browsing experience.
Necessary Always Enabled
Necessary cookies are absolutely essential for the website to function properly. These cookies ensure basic functionalities and security features of the website, anonymously.
Advertisement
Advertisement cookies are used to provide visitors with relevant ads and marketing campaigns. These cookies track visitors across websites and collect information to provide customized ads.
Analytics
Analytical cookies are used to understand how visitors interact with the website. These cookies help provide information on metrics the number of visitors, bounce rate, traffic source, etc.
Others
Other uncategorized cookies are those that are being analyzed and have not been classified into a category as yet.
Functional
Functional cookies help to perform certain functionalities like sharing the content of the website on social media platforms, collect feedbacks, and other third-party features.
Performance
Performance cookies are used to understand and analyze the key performance indexes of the website which helps in delivering a better user experience for the visitors.
SAVE & ACCEPT
Powered by